Research guide to support the study of Greek, Latin, and Ancient Studies

Try using an asterisk after parts of words to search multiple variants. Examples:

Limit your search by publication date. CLIO contains many older editions of books, including rare books (both scanned and in print). Make sure you're getting an up-to-date edition by filtering results to the last two centuries.

Limit your search by language to ensure you're only seeing translations if you want them, or original text if that's what you prefer. 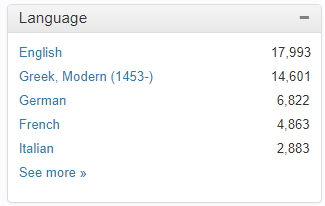 Where to find books

Both the Barnard Library in the Milstein Center for Teaching & Learning, and the Milstein Undergraduate Library in Butler contain collections on classics and ancient studies intended for undergraduate use. Use the call numbers located lower on this page to browse books in these areas.

Burke Library at Union Theological Seminary may also have helpful works pertaining to the study of classics where they intersect the study of Religion.

For art, architecture, and art history, the Avery Architectural & Fine Arts Library at Columbia will be of use.

One of the many benefits of studying classics or Ancient Studies is the plethora of public domain texts freely available. This means there are tons of editions of electronic texts of ancient writers. However, the editions of these works may be older (you'll see many translations from the late 1800s to the early 1900s, which are antiquated in their own right), so watch out for that.

These resources will require a Barnard/Columbia UNI if used off-campus.

Free and open resources for all

Since Classics & Ancient Studies are interdisciplinary fields, there's no one call number range that encompasses the area. Helpful call numbers in the Library of Congress Classification (LCC) system may include:

Art History in the Library of Congress (LCC) classification system is split up first by medium (e.g., architecture, painting, sculpture, print media, etc) rather than by geographic location or time period. Columbia's Avery Art Library also uses more than one type of classification system, so searching in CLIO is the best way to discover books on Classical or Ancient Near Eastern Art History.

There are benefits to using both Borrow Direct and Interlibrary Loan (ILL). Which service you should use largely depends on your research needs and the item you are trying to obtain.  Most people use a mix of both services.

The following table outlines some specifics of Borrow Direct vs. ILL.

Here are some sample scenarios that might help you decide which service to use.

I need to borrow a book that is checked out at Columbia.  It is for a class assignment due in two weeks.

When speed is the issue for a loan, try Borrow Direct first.  If the book is unavailable through Borrow Direct, try ILL.  Keep in mind that ILL loans generally arrive within two weeks, which may be too late for your assignment.  Adjust the "Not Wanted After Date" on the ILL form to reflect your actual deadline.

Although both services can accommodate multiple-volume-set requests, Borrow Direct is the better choice for ordering several volumes at once.  Indicate in the "Notes" field which volumes you need.  Typically, partner libraries will send no more than 5 volumes at a time of larger sets.  Please contact Borrow Direct staff if you need assistance (borrowdirect@columbia.edu).

I tried to place a Borrow Direct request for a book that Columbia does not own.  Even though I find the book through a Borrow Direct catalog search, the system will not let me place a request. What are my options?

Place an ILL request for the item if it is unavailable in Borrow Direct.

Use Borrow Direct because the standardized loan period is 16 weeks, no renewals.  ILL does offer a renewal option but both the loan period and ability to renew are at the lender's discretion.  All loans are subject to recall.