If after hours, schedule a research consultation for reference help.

How to Cite Dramatic Works

Theatre research resources can come in a variety of types, so you may find yourself citing something that's a bit unusual. Here are some helpful examples, links, and tips. The following examples all refer to the MLA style, as that is commonly used for Humanities and Arts citation. If you're ever unsure, ask a librarian.

In-text citation should refer to the Act, Scene, and Line numbers. Roman numerals can be used but are less preferred.

Titles of dramatic works are italicized both in your paper and should be abbreviated in in-text citations, e.g., Tragedy for The Tragedy of Julius Caesar.

Many plays may be published in anthologies. The MLA Handbook explains that the title of an independent work (such as a play, novel, or artwork) is italicized even when the work is contained within another independent work. So the citation may look like:

A play published on its own would be treated as a book.

To cite an interview you conducted, give the name of the interviewee, the kind of interview (e.g. personal, telephone, email, etc), and the date.

To cite a published interview, use the name of the interviewee, title of interview (if part of a publication or recording, use quotes; if independent, italicize the title; if untitled, use the label Interview but not italicized or in quotes), and finish with the appropriate bibliographic information and medium.

If you're citing the contribution of a particular individual within a performance, begin with that name.

You should cite in order to both provide credit where it's due, and also to allow those reading your work to find the same original source material. The Purdue OWL has a helpful guide here. Columbia College's guide to citing sources is also useful.

You must cite all sources that have directly or indirectly contributed to your analysis, synthesis, and/or argument in the work you submit.

You should quote your sources when it is important to convey the original author’s precise words.

One way might be to acknowledge in a footnote connected to your paper’s title or opening sentence your indebtedness to a book or person (noting the date(s) of any relevant conversation or correspondence). Alternatively, for a more significant piece of work – such as an independent study or senior thesis – you can include a paragraph of acknowledgements, noting the range of assistance you received from many people.

Common knowledge is information that a reader can reasonably be expected to know. It does not need to be cited.

However, common knowledge does not include opinion.

You should therefore be careful in the assumptions that you make in assessing what might be considered common knowledge.

If in any doubt, err on the side of caution and cite your source.

While some Digital Collections (such as NYPL) may have a citation section that will auto-generate with detail and information about a collection, there can be errors in the information. This can especially occur in historical newspaper citation generation. Many older newspaper articles didn't have titles, so databases may pull up part of a first line, or a listing of topics, as a "title." Also, many newspaper articles are read by machines, which won't auto correct for issues such as capitalization.

For example, ProQuest Historical Newspapers auto-cites this article in MLA format as:

The actual article title is depicted as such in the original paper (note: for accessible form of article, click here for the original ProQuest link): 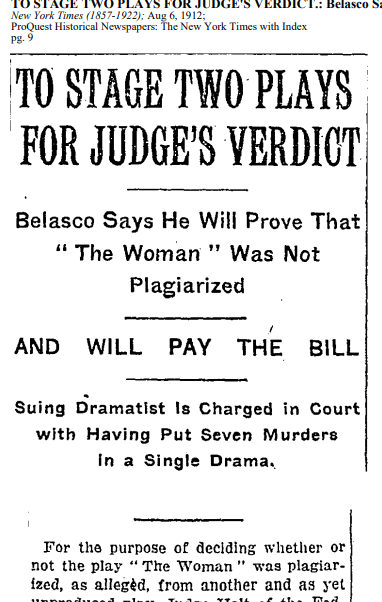 Except this article has two other hidden articles further down the page. My search term was "Mae West," and she does show up but only in that last small stub on the week's theatre productions:

When auto-generated citations go wrong like in the above examples, it's best to go back to basics and use the core elements to create a citation - it's not as hard as it seems!

The MLA Style Center has a great interactive template to create your own citation, as well as examples for each type of resource. Using the elements and knowing the formula lets you build a citation easily.